A recent article from diaTribe, “New Study Suggests Childhood Type 1 Diabetes and Kidney Disease are On the Rise,” should have T1D families and non T1D families alike on the look out. Basically, the article cites a research study published in Diabetes Care that uses data from insurance companies to draw the conclusion that in 11 years the instance of type of 1 diabetes has almost doubled in children.

Here’s the poignant quote from diaTribe’s article, “According to a new study in Diabetes Care, more US children and adolescents have been diagnosed with type 1 diabetes in recent years: the disease’s annual prevalence in a large, insured population increased 53% between 2002 and 2013, from 1.48 to 2.33 cases per 1,000 people. The study used data from insurance companies to survey the rate of diabetes in ~10 million US children and adolescents younger than 18 years old, so it does not tell us how diagnoses of type 1 may be changing in adults” (diaTribe).

It’s alarming for any disease to double its rate of incidence in 11 years, but what’s truly alarming is that one of the US’s major operating components of the Department of Health and Human Services, the CDC, gets diabetes wrong. In a major 34 year longitudinal study released in 2014, the CDC makes no distinction between type 1 and type 2 diabetes. Type 1 diabetes is an autoimmune disease, caused by the body attacking its own beta cells and stopping insulin production. Type 2 diabetes is when the body overproduces insulin, but insulin cannot enter the body’s cells, and this process is likely a product of lifestyle and genetics.

Since the CDC makes no distinction between type 1 and type 2 (again two separate and different diseases), it’s able to make the claim that diabetes is on the decline because 2009 saw a trending decrease in the incidence of type 2 diabetes. Here’s a link to the CDC’s study. 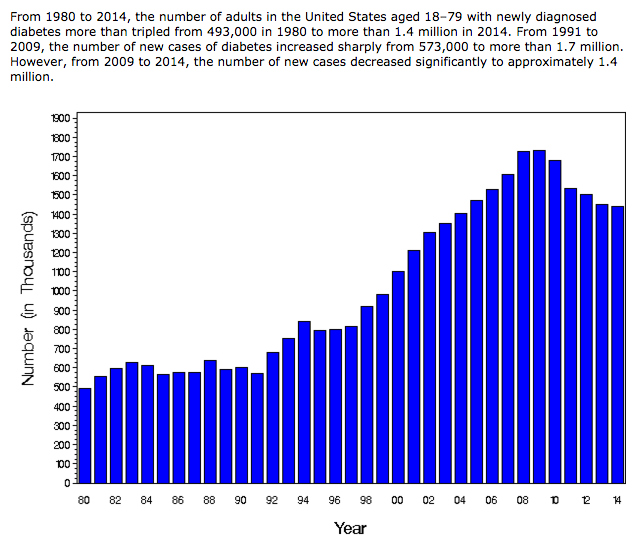 This study has angered families affected by type 1 because the CDC illustrates a willful lack of understanding in two separate diseases. Additionally, and this is the point I find most frustrating, the CDC has no disease registry of type 1 diabetes.

Remember the reporting of the Ebola crisis that started in March 2014? The number of cases in specific countries was reported daily on multiple news outlets because Ebola was a reportable disease that had a disease registry. Here’s the CDC’s (in partnership with the World Health Organization) current cases. As of this writing, the cases were updated on January 6, 2016, yesterday.

I’m not comparing Ebola and type 1 diabetes; however, if the CDC has the ability to track a disease in distant third world countries and provide up to date current information to the public, certainly the CDC should be able to track the cases of type 1 diabetes within its own country.

Type 1 diabetes was once a rare childhood disease, but it’s increasingly less rare. With the incidence of type 1 diabetes increasing across the globe, but without numbers to study, a cause and cure will remain elusive.

The type 1 community is reacting and calling for change. Here are some actions you can take.

Living with type 1 diabetes presents enough hardships and frustrations, so the government organization whose mission includes,”increas[ing] the health security of our nation” should not be another frustration.

4 thoughts on “The CDC is Getting Diabetes Wrong”