Despite being organized (the up-cycled D-Bag aside), I’ve managed to run over a Dexcom receiver in the preschool parking lot (the up-cycled D-Bag’s fault). In the frantic moments when I’m searching for a needed medical device while fixing lunch or getting ready to run an errand, I’m overwhelmed with the impossibility of replicating a human organ, which is, of course, impossible. However, thanks to technology, T1D is getting easier to manage. Pumps, continuous glucose monitors (CGMs), and hopefully closed loops systems will make management of T1D easier. We’ve certainly seen innovation since the first insulin pump in early 1970s.

Our son is 4, so finding creative ways to carry his Animas pump, CGM receiver, and the iPod to which the data is downloaded is challenging. The challenge triples at the beach. Yesterday, the new Dexcom receiver took a *quick* dip in the kiddie pool. Now it’s spending some time in a bag of rice with an ocean view. If you’re not a member of the FB group Dexcom, consider joining this group as it offers great suggestions for using Dexcom, especially when it’s been swimming.

People with diabetes can do everything anyone else can; however, there’s more planning and worry involved. This is our first summer at the beach since diagnosis. We’re learning a lot about pumping in hot weather and conducing some experiments in regards to “waterproof” versus “water resistant.”

diabetes at the beach in the foreground 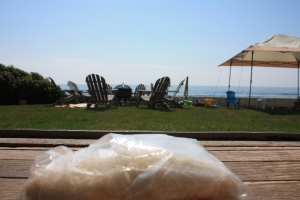 diabetes at the beach with beach in background

Both are simultaneously true.

Henry is mighty. Any person keeping a blood sugar between the lines is working overtime. Today, The Mighty shares a version of an earlier Semisweet blog, “I Got Scrapes, and This is Not a Scrape.” Check out Henry’s turn on The Mighty right here. 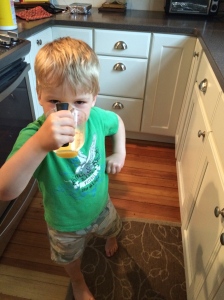 Five weeks after our son’s diagnosis of T1D, we were back in the Pediatric Specialty Unit at our first follow up visit with the endocrinologist. She closed the appointment by saying, “You guys are doing great. We don’t know what causes Type 1 Diabetes. It just happens that the right two people with certain genes found each other and fell in love.”

Type 1 Diabetes is an autoimmune disease, and after hearing that, it felt like we’d given our kid some bum genes. Like certain cancers, one of the latest theories on the etiology of Type 1 Diabetes is related to the gene-environment interaction, which is commonly described with this analogy: genes load the gun and environment pulls the trigger. If we’d loaded the gun, I wanted to find out if it was likely that we’d also pulled the trigger. 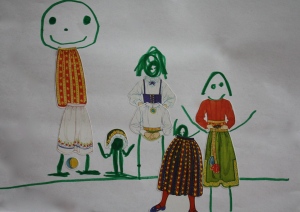 I spent a lot of time reading medical articles describing the hazy understanding of the etiology of Type 1. There are certain risk factors that make the disease more likely, but besides recently moving to a cold climate, Henry had none of these risk factors. In the general population, with no history of Type 1 in the family, the chance of developing Type 1 is 0.4%. On both sides of our family, Henry is the first person to have Type 1. We have the usual history of autoimmune diseases that are common in the developed world, like rheumatoid arthritis and Hashimoto’s, but no T1D until now. 0.4%

In my research, I did discover that Type 1 is increasing about 3% annually, which in the world of disease, is a quickly climbing rate. If I’m being honest with myself, I knew I wouldn’t find any answers in all the research, not even much peace.

There’s nothing any parent of a child with T1D does or doesn’t do. There are certain populations and places where Type 1 Diabetes is more likely, but until there is a disease registry, we won’t know the true occurrence of T1D. I still find it fascinating to read case studies and medical articles, like “Pathogenesis of type 1 Diabetes” by Massimo Pietropaolo, MD (subscription required to read full article), but sometimes a good meme nails it.

This guy opened the first ever Diabetes In A Minute a series of mini documentaries about living with diabetes at Friends For Life 2015 in Orlando.

He’s got scrapes, but obviously diabetes isn’t one of them. For now. When this video was broadcast across four big screens, Henry left saying, “Everyone knows my name is Henry.” And it’s true, people came up to Henry and complimented his video, to which he replied, “Maybe next year you can make a video.”

He is young and he is innocence. In the video, Henry blithely tells the audience about his scrapes, and in the next breath he shows off his pump and continuous glucose monitor (CGM), as though these two were equal. One day the stigma and needed longanimity of “diabetes” will outweigh scrapes, and that is a natural rite of passage.

When a stranger asks me about the gear Henry is wearing or I explain to a colleague why I had to step out of meeting a few days prior, T1D comes up, and I briefly explain the basics. Usually, this scenario goes smoothly and hopefully someone understands more about T1D. However, sometimes this moment is teeth cringing, and an over-sharing stranger tells me about his or her dead grandmother in the produce aisle. When people respond after learning of my son’s diagnosis, I believe they are usually attempting to relate or don’t know what to say, but as a parent of a child with diabetes, the two most dreaded responses from someone who learns of my child’s disease are:

I usually say, “I’m sorry to hear that,” but I want to say, “I’m sorry to hear that. Once you figure out if it was Type 1 or Type 2, you  might want to read a little more about the amazing treatments available today for people with T1D. Oh and hey, have some common sense. Maybe don’t tell me about your dead relative while I’m grocery shopping with my four year old son who happens to have the same disease that killed your grandma / great aunt / grandfather’s cousin.

2. Well, at least it’s good he has it so young, so he won’t know the difference when he’s older.

I usually say, “A lot of people say that,” but I want to say, “A lot of people say that because they are misinformed. I’m sure he’s noticed his older sister is not wearing a pump and getting blood sugar checks 10-12 times a day. He’s also noticed that the other twenty-three kids in his preschool class don’t check their blood sugar, wear pumps, or go on field trips with massive medical supplies in a backpack. Also, those 13 or so years, which he would of had if he were diagnosed later, with a normal, salubrious blood sugar that are conducive to his longevity, I don’t mourn those.”

I think Henry’s got some scrapes, but hopefully as people become more educated about T1D they won’t add a new scrape. The first step toward empathy is meeting someone with T1D, and the second step is learning what to say. It’s great to hear, “I’m sorry to hear that. Can you tell me more about Type 1?” or “I’m sorry to hear that. I’m not sure I really understand the difference between Type 1 and Type 2,” or even, “I’m sorry. I think I know someone else with that.” People with T1D need advocates to understand the difficulties and trials of living with T1D, so listen to their stories before you tell yours.

Having diabetes sucks, so my husband and I take every opportunity to find humor in odd d-moments; therefore, we call the bag that carries the glucagon kit, Animas meter-remote, glucose tabs, and all the other supplies, “d-bag.” Yup, the d-bag. We might be going out to eat or dropping Henry off at preschool, and while locking the door, one of us will call to the other, “Hey, you got the d-bag?” We live in a nice, midwestern neighborhood, and we are those neighbors.

When Henry was diagnosed, the JDRF gave us a the Bag of Hope that contained Rufus and a camo green d-bag, but we quickly out grew this d-bag.

JDRF d-bag from Bag of Hope

Then we graduated to the beauty below, an up-cycled bag that a kid’s lunch from the San Diego Zoo came in. I’m proud that we carried this bag without one scrap of shame for eight months.

a classy d-bag made from a recycled water bottle

When I realized we were also dumping used test strips, tissues, crumpled receipts, and treasures like pine cones discovered on walks into the bag, it was time to upgrade the d-bag. A couple of FB groups for diabetes posted about the Smartstar Multi-functional Outdoor Sports Chest Bag Pack. We ordered it and love it. There are long inside pockets perfect for the glucagon kit and juice boxes. We use a carabiner to clip the CGM (constant glucose monitor) to the outside d-ring.

We’re going to add the international symbol for diabetes, a blue circle, and some flashy blue paracord and max out this d-bag. Pockets galore! This d-bag will be able to hold many, many pine cones.

We stopped in Jekyll Island for a few days of relaxation after our first ever Friends for Life Conference, which is a Children with Diabetes event. Our four year old had been living with with Type 1 Diabetes for 16 months. In the previous weeks, the CEO of CrossFit tweeted ignorant, harmful remarks about diabetes and sugar, and a four and five-year-old passed away from complications of undiagnosed Type 1 Diabetes after seeking medial care and getting misdiagnosed. The past few days images of our four-year-old son sitting at the pool or playing on the beach filled me with pride and sorrow.

I believe there is power in story. I believe it takes a village. Given these two premises, I started a blog fueled by the power of story about lives, research, and advocacy as it relates to T1D. The Diabetes Online Community (DOC) has been and continues to be an amazing resource for advice and inspiration, so I wanted to be a part of this community. While a cure for Type 1 remains elusive, grass root organizing and sharing, just like the effort undertaken by Night Scout Project #WeAreNotWaiting, can lessen the burden of this disease. This is Henry’s story, and the story of all the people who love him told one number, one day, one fear, one high, one low, one laugh at a time.