November 14th is World Diabetes Day (WDD), a day created by the International Diabetes Federation to bring awareness to the growing concerns surrounding type 1 and type 2 diabetes. Last year, I recognized WWD with the 2015 Type 1 Diabetes Index.  This year, some of those numbers have grown.

It's Diabetes Awareness Month. Here are a few numbers to help show what life with T1D is like. Join me in helping to change the future of #T1D by texting 'ACT' to 53731 to sign up to become a #JDRFAdvocate with @jdrfadvocacy #diabetesawareness #jdrf #t1d #insluinisnotacure

My son is in his second week of participating in a sport, so I’m new to managing blood sugars during organized physical activities. During his first week of practice, I sat watching the CGM (constant glucose monitor) as it read 120 with an arrow straight down, then the next read out, five minutes later, was 90 with two arrows down. At practice this week, I disconnected his pump, hoping to avoid the rapid drop. 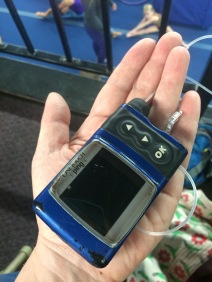 As I held his makeshift pancreas in my hand, I looked up and saw grandparents taking short videos, parents cheering kids on, siblings sitting through practice, drinking from juice boxes, eating unmeasured food. In one hand was my son’s insulin pump, the other his CGM receiver, and with all my willpower, telepathically, I was willing his blood sugar not to drop any lower, but it was 98 with an arrow down. As I rushed downstairs to give him a glucose tab, it struck me, once again, how different my experience of the ordinary often is, usually because I’m thinking about some difficult diabetes question or trying to do diabetes math, which is impossible, by the way.

For World Diabetes Day 2016, I’m sharing a few of the typical questions I have throughout any given day.

If he’s eating 45 carbs for dinner, with lots of protein, but not much fat, is 1.75 units of insulin enough to cover the meal?

Should I wait 5 more minutes to see if one glucose tab is enough to bring his blood sugar up?

Will the school nurse think I’m overprotective if I call? I just dropped him off at school with 2 units of insulin on board, a glucose tab in his mouth, and he’s 79 with an arrow down. Yes, call. Are you crazy? Why would you not call and tell her this?

Did I give him enough insulin?

Did I give him too much insulin?

Should I explain to the man who just picked up his kid and moved him to the other side of the pool after seeing the medical devices on my son that my son is not dangerous or contagious? Should I tell him it’s OK to ask questions, but not to stare and ostracize?

Why do I feel guilty and lucky at the same time because my son has access to insulin and others don’t?

When I walk in his bedroom this morning, will he be conscious?

Why does he eat the exact breakfast every morning and sometimes he’s 120 an hour after and other times he’s over 300? The.exact.same.breakfast.

What if Henry has kids and they get diabetes?

As I look at his CGM many hours after eating out, I wonder just what exactly is in restaurant food.

When I’m talking to a representative  from my insurance company after they’ve limited my son’s test strips and declared his Dexcom CGM out of network, and I ask this person how much my son’s life is worth, do I really expect an answer? Do I really want them to answer this question?

How will my son handle the burden of type 1 diabetes as a teenager?

Is his sister peeing more than normal? Am I?

After asking for the nutrition information at a national chain of ice cream parlors, do I push it and try to explain for a third time that I’m asking for carbohydrates, which are a very different thing from calories?

Those two pieces of pizza are 70 carbs. Right?

After learning of someone else in my local community is diagnosed with T1D, I wonder why the CDC is not tracking the incidence of type 1.

How will Henry respond when some of his classmates stop being curious and start being hurtful?

Sleeping in two and three hour intervals is enough, right?

November is diabetes awareness month. Please consider signing this petition that asks the CDC to start tracking the occurrence of T1D or making a donation to a diabetes organization.