T1D is a family disease. Our family has learned how to recognize and treat a low blood sugar. We make decisions about what to eat and when. We monitor blood sugars 24 hours a day. Henry’s sister also helps. She watches his numbers while they play and distracts Henry during site changes.

Part of Henry’s pancreas may not be functioning, but he’s got a village of support replicating (as close as humanly possible) what his beta cells once did.

Beyond Type 1 is celebrating #Who Do You Love? on their Instagram wall. Of course, Ava is a great addition to #teampancreas.When it comes to diabetes, there’s not a lot to celebrate; however, the way family and friends rally with support and understanding is something to honor.

Siblings are such an important part of living beyond. "I love my big sister Ava because it's sometimes hard to have diabetes. She makes me laugh and plays with with me when I have to get a new site. I like to play with her and Jerry the Bear the most.” #WhoDoYouLove #T1D #BeyondType1#Type1 #Type1Diabetes #Diabetes#WeAreNotWaiting #change #disruptdiabetes #DoGood #SocialGood #philanthropy #awareness #advocacy #inspiration #attitude #disruptlikeabadass #DOC #thisiswhatdiabeteslookslike #sweet16 #type1warrior #DiabetesAwareness #global_family #community #livebeyond

About this time last year, Henry was taking a bath when he threw up. Matt began checking for ketones and calculating how much insulin he could or couldn’t give to a kid with a tummy bug, while I ran out to the grocery to purchase lots of soda, popsicles, and jell-o with sugar.

Tummy bugs are tricky with T1D. Ketones develop with sickness and when there’s not enough insulin to break down the glucose. In someone with T1D, what clears ketones is insulin and massive hydration, but when someone with T1D is vomiting, the person can’t keep the fluids down so that insulin can be administered safely. As ketones and dehydration increase, probably coupled with a low blood sugar, the likelihood of DKA
(diabetic ketoacidosis) increases. Usually, tummy bugs send Henry to the hospital. Sometimes we ride it out in the ER with an IV and sugar drip, and sometimes he’s admitted to the pediatric unit.

A year ago I was standing in line, anxious and worried, about to purchase a bunch of sugar. As the cashier was ringing my items she asked, “Are you planning a party?”

Hurried and harried, I replied, “Yeah, something like that.”

She then asked me if I’d like to donate a dollar to the JDRF and pointed toward a stack of papers in the shape of sneaker. Our local grocery store participates in the JDRF sell a sneaker campaign, where a person can add $1 to his or her total and the money goes to the JDRF. The total irony of that insane d-moment sunk in, and I inhaled to stop any feeling from overwhelming me.

I said yes, and signed Henry’s mom dx’d 3/6/14 then ran to my car, hoping to get all this sugar home in time to help. A few hours later found us in the ER, and Henry recovered quickly.

There are significant dates, diaversaries (diagnosis + anniversaries), and yearly campaigns, that mark the emotional passage of time that comes from living with a chronic condition. Last week I was standing in the grocery store, purchasing food for dinner, Henry was healthy, playing in the snow at his preschool, a young boy had just passed away from complications resulting from T1D, DKA, and a tummy bug. The clerk asked if I’d like to donate a dollar to the JDRF.

I said yes, and signed Henry’s mom dx’d 3/6/14 then walked to my car, thinking about Andrew’s family, about Henry a year ago, about the relentlessness of time across a chronic condition.

The ADA’s 2016 Standards of Medical Care in Diabetes recently shifted its language to match the ADA’s position that diabetes does not define people, “the word ‘diabetic’ will no longer be used when referring to individuals with diabetes in the ‘Standards of Medical Care in Diabetes.’ The ADA will continue to use the term ‘diabetic’ as an adjective for complications related to diabetes (e.g., diabetic retinopathy) (54.)'” This means that “diabetes” is now used to refer to the person who has it, instead of “diabetic;” for example, “My sister has diabetes,” not, “my sister is a diabetic.”

The name shift seems simple, but it’s packed with emotions, implications, and for some, even anger. I wrote a piece, Diabetic v. Diabetes, shortly after the ADA published the 2016 Standards of Medical Care in Diabetes, which explained the name change. When I linked to the article on Semisweet’s Facebook page, within seconds, the first comment was, “This is stupid.” Beyond Type 1 featured the article, and it garnered some healthy debate on the Beyond Type 1 Facebook page as well.

Some people see diabetic v. diabetes as splitting hairs or unnecessary political correctness. When I encounter the people who prefer to be called “diabetic,” or at least voice a strong and angry opinion against those asking to be called, “person with diabetes,” I respect their right to be called “diabetic.” In general, it seems these people have lived with the disease for many years— years when the battle was greater because technology wasn’t as advanced and understanding was scarer. Usually, these people are adults; however, children are more sensitive to language, labels, and their implications. In fact, we’re all probably not too far removed from that hateful comment or name someone hurled at us on the playground.

I’m the parent of someone who has diabetes. I couldn’t protect my son from getting diabetes, but I can try to protect him from the implications of being called “a diabetic.” He’s not even in kindergarten yet, and already kids his age have told him he, “can’t eat a certain food because [he’s] diabetic.” He’s been told he can’t play a certain sport because he’s “diabetic.” A neighbor kid didn’t want him in her yard because he’s “diabetic.” He’s brought home treats, like half a muffin or cupcake, from school because he didn’t eat it when the other kids did. We don’t make certain foods off limits, but he’s heard kids his own age tell him what he can’t eat. I wonder what he’s thinking as he watches his classmates eat their treats. He can eat that cupcake or cookie because he has diabetes, but he’s inherited the stereotype that he can’t, because he’s “a diabetic.”

The governing associations like American Diabetes Association are changing their language, and I think this is because our perception and understanding of diabetes is changing. To be “a diabetic” was a certain death sentence 94 years ago. After insulin, to be “a diabetic” meant doctors predicted vastly shorter lifespans; fear and misunderstanding from teachers, relatives, and the larger medical community impacted people’s lives negatively. Women with T1D were told they could not and should not have children (case in point, Steel Magnolias).

In this era of better treatment, people with diabetes can live normal lifespans with fewer complications. As more and more people live longer and better with T1D, we’re starting to understand that living with a chronic disease or condition, like diabetes, has impacts on our emotional health, romantic relationships, and mental health. Having diabetes, means we can talk about this, and if we talk about being “diabetic” versus living with diabetes, there’s a simple paradigm shift at work: a limited life vs. a limitless life.

Below is the picture of a child who’s just been given a shot of insulin for the first time in 1922, and he’s starting to wake up from DKA. He was in a Canadian hospital with a ward for diabetic children. Just weeks before, his parents sat at his literal death bed. 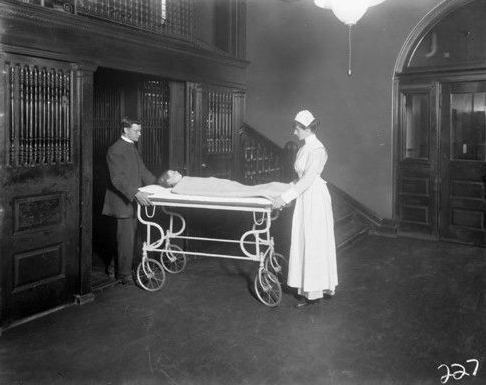 He’s a picture of 4 time Olympian, Kris Freeman. He happens to have Type 1. In the photo, he’s training for another race and is wearing an insulin pump, Omnipod, on his arm. 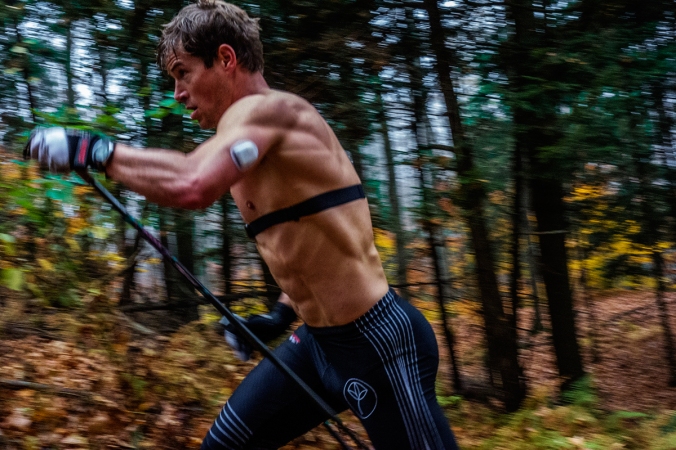 In both pictures, we can see the life that insulin makes possible, and what’s harder to discern, but still visible, are the implications of being diabetic versus having diabetes.

Being diabetic once meant limitations, and yes, having diabetes requires my son to make sacrifices and take extra steps, but being a person with diabetes puts the focus on personhood. Thankfully, we’re living in an age when having diabetes means it’s a conversation about what we can do instead of what we can’t, and that’s ultimately the difference between diabetes and diabetic.

“Social Media for the Social Good,” that’s how Kerri Sparling described the project, Spare a Rose Save a Child, on Stacey Simm’s February 2nd podcast, Diabetes Connections. The idea behind Spare a Rose Save a Child is simple: buy one less rose than you would have on Valentine’s Day and donate its cost. By donating $5, the cost of one rose, a child is supplied with insulin for a month.

Living with a chronic condition means you have to secure your oxygen mask first, but when cabin pressure is restored, there’s an awe-filled moment when you can gaze out the window at the top of clouds and be amazed that you’re in about the fourth generation of humans who’ve lived on this earth, to fly in the air, and about the third to be alive since insulin’s been discovered. It doesn’t take long to recognize that access to life-sustaining medicine shouldn’t be relegated to where you were born.

As we were being discharged after our son’s diagnosis, a hospital pharmacist sheepishly walked into our room. He was carrying a large brown paper bag, and at first I thought it was odd that he was holding groceries. I thought maybe he was on his way home to prepare dinner and just wanted to check-in with the doctor, who was going over discharge orders with us. It turns out the sack held a month’s supply of syringes, lancets, ketone test strips, alcohol pads, and two kinds of insulin. As a way of apology, he said this was one of the worst parts of his job, entering the room of a young child who had just been diagnosed with a lifelong disease and letting the family know that they’d be billed around $500 for the month’s supply of medicine and medical equipment the hospital was sending home. He then noted that we had good insurance and would be paying less than that.

And we do have good insurance. In fact, we have access to everything (medical equipment, doctors, education, medicine) that we could possibly need to take care of our son’s diabetes, but this isn’t true for the underinsured, those without insurance, and those living in developing countries. Diabetes is hard, and we have everything we need. Diabetes is hard, and it’s unthinkable for those who don’t have what they need. This Valentine’s Day instead of buying chocolate and flowers, we’re buying insulin for someone. What’s sweeter than that?