On January 11th, two seemingly unrelated images from the past crossed my Facebook newsfeed. The initial image, from JDRF Canada, celebrated the first injection of insulin given to a human 94 years ago on January 11, 1922. The patient was Leonard Thompson, a 14 year-old boy in a diabetic coma, what was then the end stage of type 1 diabetes. Within hours Thompson began to recover, and the discovery of insulin was immediately heralded as one of the greatest accomplishments of modern medicine. In fact, the The Nobel Prize in Physiology or Medicine was awarded to Banting and Macleod in 1923. 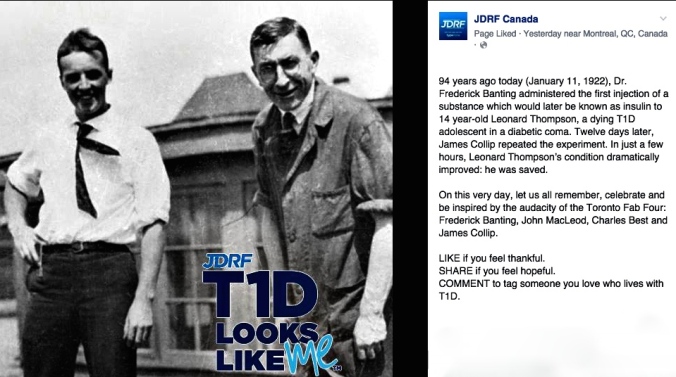 I’m fascinated with the medial history that surrounds T1D— both in the disease’s enigmatic nature as well as the scientists, doctors, and patients that seek to end T1D.

The second picture that crossed my newsfeed is from January 11, 2014. As a family, we were looking forward to seeing our first movie in the theatre and taking a walk downtown afterword. The songs and characters from Frozen swirled on the screen, and my daughter sat on the literal edge of her seat, holding my hand and inhaling with delight. Henry collapsed into his papa’s lap, and barely moved during the show. Since this was his first time in a theatre, I thought that maybe the light and sound were disorientating to him. I tried to make light of his grumpiness, so I took a picture of him. 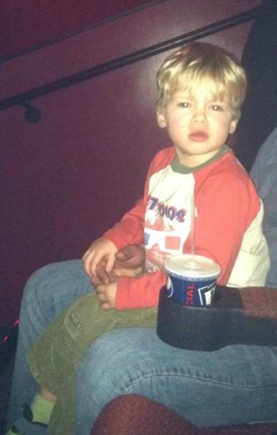 Now when I look at the picture, I see his flushed cheeks and puffy eyes, which happen when he’s had a persistent high blood sugar. The small Sprite in the cup-holder (probably the second or third soft drink he’d ever had), haunts me, and  I understand why he was lethargic during the movie and walk.

Around the time of the photo, the only symptoms he showed were irritability and lethargy. About three weeks later, my mother visited and commented on the heaviness of Henry’s morning diaper. I said, “I think he might have diabetes.”

When I said that, I didn’t really think Henry had diabetes, but I must have said it to voice an irrational fear, so the absurdity of the worry would become a talisman against its reality, like knocking on wood.

Parents of young children with type 1 diabetes often talk about the last picture of their child before diagnosis, noting the bittersweet moment. Usually, the photo shows some evidence of weight loss or lethargy, so parents beat themselves up for not knowing what was going on. On the other hand, there’s great liberty, because they didn’t know what they didn’t know— the ceaseless, worrisome nature of type 1 diabetes— a paradox  photo of a really sick kid in a last moment of joyful blindness.

When both these pictures crossed my newsfeed on January 11th, my first thought was thankfulness. How little time has actually passed between these two moments, but how many lives. Henry’s great grandfathers were born before the invention of insulin, and it’s only because of insulin that Henry’s alive.

In the early days after a T1D diagnosis, there’s shock and sadness, but there’s also an awareness of the great heritage of suffering and success that comes with T1D. I hope we’re at a moment in T1D history when the burden of care improves and the instance when some unlikely, scrappy doctors and scientists stumble onto the next breakthrough.

One thought on “Diabetes & Anniversaries”