So, there’s this awesome dad, who hand delivered notes to his neighbors before Halloween, to explain that his son was on a Ketogenic Diet, and could not have any sugar because it could trigger seizures. The father attached a small toy to each letter, so that his son, like any other goblin, witch, or ghoul, could enjoy trick-or-treating.

Parenting is a paradoxical slog into empathy, sacrifice, and joy. Now complicate that journey with a condition, syndrome, or diagnosis, which means one guiding hand tries to soften the blows the world will deliver, while the other toughens the exterior to face the world. Sometimes, the right confuses the left.

After our three-year-old son was diagnosed with type 1 diabetes, we started seeking out opportunities that would simultaneously educate and prepare our son for the world and the world for our son.

There’s a teal pumpkin project, whose pledge promises “extra kindness to kids” by supplying “non-food treats at the store like glow sticks, stickers, bracelets, and more” on Halloween (www.foodallergy.org). Last year was our son’s first Halloween with type 1 diabetes, so we had a teal pumpkin and passed out stickers, play-dough, and tattoos instead of candy. He trick-or-treated in our neighborhood and collected 100% candy, which we let him eat a little bit of over time, and with a lot of extra insulin. The left and the right.

This year, we were planning the same, but teal pumpkins are hard. While searching for non-food treats at the fourth store in two weeks, I encountered this display: 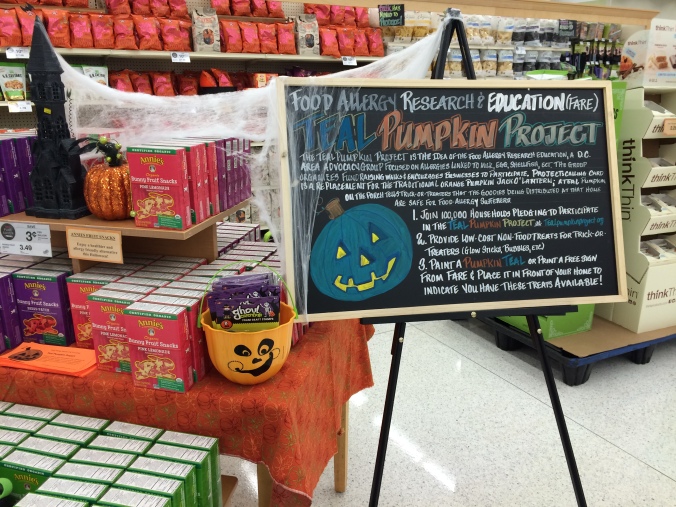 in the health food section of our local grocery chain, next to boxes and boxes or gummy treats, which have 17 carbs per pouch, and are most certainly food, violating pledge item #2: “non-food treats.”

So, instead of optimistically shopping in the adjacent town for Halloween non-food treats, I bought three bags of Smarties. I figure the left over Smarties, (6 carbs per roll), will become medicine for my son to treat hypoglycemia.

Ironically, I’ve seen more information and displays about teal pumpkins this year than last, but less feasible ways to create a teal pumpkin trick-or-treating experience. I suppose, with most awareness campaigns, it’s two steps forward and one back. On one hand, it’s good that there’s increased awareness, but the increased awareness shines light on just how gaping and insurmountable the problem is.

Really, I’m not that concerned with how difficult it is to create a house that can host the teal pumpkin project. Rather, I’m concerned with how easy it is not to. I live in the midwest, a region famous for producing corn. Sometimes, I drive just outside of town and am bewildered at the fields, both magnificent and damning. 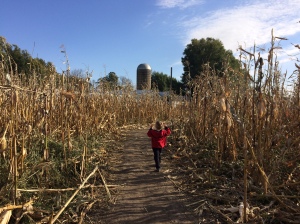 What I see has implications beyond type 1 diabetes. I see a tradition of family farms lost to big agribusiness. I see feed-corn, industry, profit, hardly getting-by, and fields and fields of soft drinks (and let me be clear, in the right moment, a soft drink could save my son’s life). I see candy that’s nested in bowls and handed out at banks, offices, and parties. What I don’t see is how we greeted each other before a shelf-stable promise of sweetness.

When my sister and I were little, we trick-or-treated the length of our mile-long dead-end street, past an eerie cemetery, where westward settlers who died on the stagecoach route in the 1700 and 1800s were buried. The very last house on the street was famous, in the neighborhood, for giving out decidedly tongue-in-cheek treats. One year, each trick-or-treater got six pennies, another year a box of raisins; my two favorite years they passed out dental floss and toothbrushes. Kids were always milling around the house, exclaiming in mock-protest, outrage over their treats. But the owners’ message was clear: “You made it this far, now take care of yourselves.”

The message about teal pumpkins is out, but why is it only one day a year? Why are there bowls of candy in offices? Why do kids meals come with free soft drinks and desserts? When did we cross the message of care with sugar?

One thought on “Teal Pumpkins Are Hard”