I helped ease my sister back onto her hospital bed when the afterbirth pains had passed. I stood over her, but she was already asleep, a grimace  of pain and sadness etched her frown, even in sleep.

Less than 24 hours ago she’d had an emergency cesarean to deliver her 33 week old twins. Baby B was showing distress. The twins where delivered at 5:06pm and 5:08pm, and whisked to the NICU. Rebecca and her husband were called into the NICU at 2:00am to meet their babies, but before she could see her babies, still in the wheelchair, the doctor asked if they’d had prenatal chromosomal testing. Twins are automatically considered high risk, so they’d had every test. She was told her son had Down syndrome before she ever got to see or touch him.

She was told how the world would see her son before she ever saw her son. When any infant or child is diagnosed with a condition, syndrome,  or disease, the parents need to grieve for the life they’d expected for their child, then, without much flourish, put that life away and show up for the life that is. Rebecca showed up. Before Everett was discharged from the NICU, he had a team of therapists waiting for in-home visits.

When Rebecca and I talk about this moment she asks, “Why wasn’t I allowed to meet my son before someone told me what was wrong with him? Why did someone tell me what my son couldn’t do before I saw him? Why can’t people see what he can do?”

Two months later, the twins were healthy and home, but my husband and I were in the hospital with our son, Henry, who was just diagnosed with type 1 diabetes. A week later, we had our first follow up at our local doctor’s office, and the nurse not so much asked as  stated, “Your son, he’s the type 1 diabetic?”

Just like his cousin, my son has a diagnosis that will define him, but much of their battle will be for a people to see them as people first. Rebecca knew this all along. Person first language.

About a year after her son’s birth, my sister delivered this speech to a group focused on advocacy for Down syndrome (DS).

Two. This number began popping up in my life. Two blue lines on the home pregnancy test. Two embryos. Two fetal heart beats. Two tiny bodies growing inside of me. Two heads, two hearts, two souls, two babies to join our other two children at home. Everett and Vivienne were born two minutes apart. At two in the morning, only seven hours after they were born, we were asked what chromosomal prenatal testing we did.

I am a planner, so we did every check, test, and measurement throughout the entire high risk pregnancy. Apparently because they are twins, Vivienne “covered up” many of the markers all the specialist and doctors would have looked for with Everett. Before I got to even see or hold Everett, one of my two perfect babies, I was told what was “wrong” with him.

Days later we were shown his karyotype. A karyotype is a picture of a person’s chromosomes. Instead of two 21st chromosomes there were three. Everett has Down syndrome.

The next day was Christmas Eve, and I as discharged from the hospital, but I left my two premature babies in the NICU. They were born two months early, but the babies got stronger, and so did I. Daily I would visit them, but I was torn between the two isolettes.

Not having a prenatal diagnosis of DS forced me to hit the ground running. I had planned for my son to have one life, but now I was planning for him to have another. I looked for specialists, services, groups, funding, schooling, and opportunities for my son.

When Everett was two months old he started receiving services through our state’s early intervention services and as a two person team, we created plans, goals, and outcomes for Everett. When we came across an issue like feeding, sitting, or playing, we problem solved together. Two heads are always better than one.

During the peaceful moments right before bed I think of my two perfect babies and how they came into the world too early. I take their hands or caress their cheeks and I think of all of their cells and chromosomes in their bodies that make them who they are. I can imagine Vivienne’s Karyotype: the two 21st chromosomes next to one another. Then I think back to the time in the NICU when I was alone and scared, when the geneticist displayed Everett’s Karyotype to my husband and me. I remember those three 21st chromosomes lined up next to each other. Now I know that three is just as good as two. Maybe three will be my new lucky number. 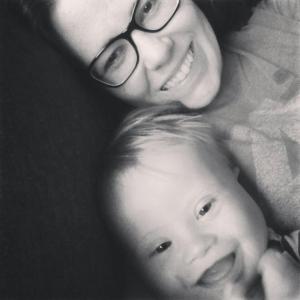