Diabetes is often considered an invisible illness. For the first months after our son’s diagnosis, a stranger could look at our kid and not know he was living with a lifelong chronic disease. He was on multiple daily injections (MDI) and didn’t yet wear a continuous glucose monitor (CGM), so no medical devices identified as someone with a disease or disability. However, three months after his diagnosis, he started wearing an Animas insulin pump and Dexcom CGM.

In fact, unless someone knew what to look for (tubing coming from a pump, adhesive peaking below a shirtsleeve), Henry’s diabetes would be invisible to most. But when Henry swims, his diabetes becomes visible.

There are all sorts of pumps and a few CGM’s on the market, all with varying degrees of water resistance. I think the choice of insulin therapy and delivery is personal and specific to each person with diabetes. For us, the Animas pump was a good choice. It’s waterproof, and we devised a way for Henry to wear it while at the beach, so we don’t have to disconnect and manually deliver the basal a couple of times an hour. Henry’s free to play in the hot sun without us worrying about his insulin overheating or losing a pump site. However, to ensure that the site and pump are in good working order (even in salt water) we devised a pretty creative work around. It’s a bit like nesting dolls, but to us it was worth preserving the site and not interrupting Henry’s time at the beach. 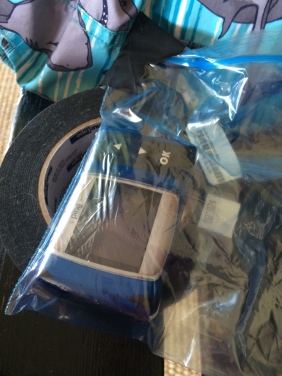 3. Next, we placed the pump in its ziploc bag in a FRIO insulin pump wallet, so that the insulin didn’t denature in the heat, and then placed the FRIO pump wallet in a SPIbelt. (I told you it’s like nesting dolls!)

4. Hang the d-bag from the sun shelter and enjoy a preserved site and pump.