“Social Media for the Social Good,” that’s how Kerri Sparling described the project, Spare a Rose Save a Child, on Stacey Simm’s February 2nd podcast, Diabetes Connections. The idea behind Spare a Rose Save a Child is simple: buy one less rose than you would have on Valentine’s Day and donate its cost. By donating $5, the cost of one rose, a child is supplied with insulin for a month. 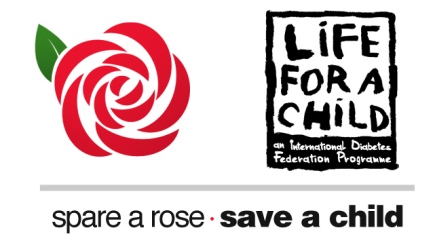 Living with a chronic condition means you have to secure your oxygen mask first, but when cabin pressure is restored, there’s an awe-filled moment when you can gaze out the window at the top of clouds and be amazed that you’re in about the fourth generation of humans who’ve lived on this earth, to fly in the air, and about the third to be alive since insulin’s been discovered. It doesn’t take long to recognize that access to life-sustaining medicine shouldn’t be relegated to where you were born.

As we were being discharged after our son’s diagnosis, a hospital pharmacist sheepishly walked into our room. He was carrying a large brown paper bag, and at first I thought it was odd that he was holding groceries. I thought maybe he was on his way home to prepare dinner and just wanted to check-in with the doctor, who was going over discharge orders with us. It turns out the sack held a month’s supply of syringes, lancets, ketone test strips, alcohol pads, and two kinds of insulin. As a way of apology, he said this was one of the worst parts of his job, entering the room of a young child who had just been diagnosed with a lifelong disease and letting the family know that they’d be billed around $500 for the month’s supply of medicine and medical equipment the hospital was sending home. He then noted that we had good insurance and would be paying less than that.

And we do have good insurance. In fact, we have access to everything (medical equipment, doctors, education, medicine) that we could possibly need to take care of our son’s diabetes, but this isn’t true for the underinsured, those without insurance, and those living in developing countries. Diabetes is hard, and we have everything we need. Diabetes is hard, and it’s unthinkable for those who don’t have what they need. This Valentine’s Day instead of buying chocolate and flowers, we’re buying insulin for someone. What’s sweeter than that?