It’s Sunday night. With only one work and school week behind us, the next week and the one after that loom. Last week was mixed with some new ratios (adjusting how much insulin is given for a set amount of carbs), a couple of lows, technology failures, and an embarrassing encounter with my neighbor. Here are some of the highlights mixed with a few tales of low.

Having a continuous blood glucose monitor (CGM) is like having a porthole into this strange metabolic dance between insulin, carbs, exercise, and stress. After Henry’s first day back at preschool it wasn’t his sweat soaked hair or his teachers remarking how much more “outgoing” he is this year, as it was the CGM data that told me he was a wild man. He was really, really glad to be back at school, exerting lots of energy, which lowered his blood sugar. For dinner he ate a cup and a half of pasta and was double arrows down with a reading of 135 an hour after dinner. By blood he was 80. His blood glucose never rose above 160 the entire night. If only first days back could be bottled and used with insulin to help control high blood sugars.

My husband teaches an 8am class, so on Tuesdays and Thursdays I get the kids up and off to school on my own. I woke to Henry’s pump beeping because the battery was dying. Here’s the short of it: a battery change requires priming, which means a new site. It still takes two adults to help with Henry’s site changes, so I cheated and changed the battery with a new cartridge. I did this in the dark, not wanting to wake up Henry, and in this great plan, I didn’t realize I’d put the battery in backwards. Now the battery cap would not come off and the pump wouldn’t turn on. No matter how hard I tried, I could not unscrew the cap. I began looking out my backdoor, wondering which neighbor’s door I could knock on before 8am and ask for “the man of the house” to help unscrew the battery cap from an insulin pump. Thankfully, I caught a neighbor on his way to work. With my wet hair still in a towel and in bare feet, I set feminism back a few years, but Henry got insulin and everyone got to work and school on time.

I know only about 10-20% of people with type 1 diabetes use a continuous glucose monitor (CGM), but based on the hold time with Dexcom, I’d say market penetration is closer to 90%.

At preschool drop off Henry was 111 with double arrows down on the CGM, but he was really 60 by blood. He still had over a unit of insulin on board. I stayed during group time to correct the hypo. One juice box and 4 glucose tabs later his numbers were moving in the right direction. This was when I realized preschool has ushered in a new activity level, so while sitting criss-cross applesauce during story time, I increased the insulin to carb ratio. The further those dots (a glucose reading sent out every five minutes) are from each other, the faster things are happening. 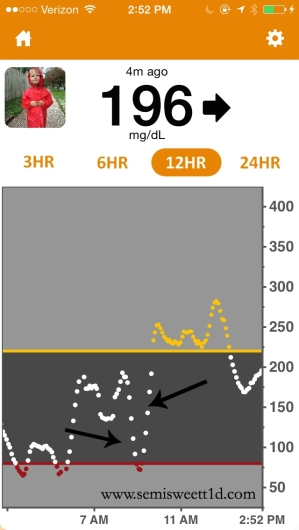 There was a light spirit in the air; as a family, we were closing the first week and moving toward the weekend. Over breakfast and out of the blue Henry asked, “Will I always have diabetes?” Henry’s asked this question before, and we’ve always answered in the affirmative. Matt, Henry’s father, took a deep breath and said, “Yes.”

This sat with all of us for a moment. Then Matt added, “But people are working really hard to create new things to make diabetes easier. It will get easier.”

It will get easier. We’re ready for the second week.

One thought on “A Week In Review: Diabetes’ First Week at Preschool”