Obviously, education of the staff must be the most thorough and detailed. When our son was diagnosed he was in an in home daycare, and my husband and I split time with him at daycare  for his first week back, and then came during nap time to teach the staff how to draw insulin in a syringe, then use a pen, and then use a pump. We transitioned through all these in a quick three months. When our son started at a preschool on campus where we work, we coordinated with the director to train the student workers and staff as part of their training hours. We brought Henry’s dinner with us and demonstrated counting carbs, checking blood sugar, and then bolusing for the carbs he ate right in the training meeting. Picnics make all meetings better.

We brought Rufus, the JDRF bear to preschool, and we purchased copies of the Pink Panther Understanding Diabetes books for the teachers and classroom. Lastly, we wrote a letter to be sent home with the parents. Luckily, the school Henry’s attends does not celebrate birthdays with food, but I was very touched when a few weeks after school started we attended a birthday party  for one of his friends from school and discovered a plate of cheese, a bowl of goldfish, and a low sugar cupcake just for Henry. 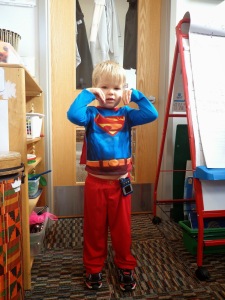 superhero with diabetes at super preschool

Here’s a version of the letter we’re sending home this year. If this letter works for you, adapt it and take it to your preschool.

Because your child/ren are at pre-school with Henry, they might see Henry get his blood sugar checked, receive insulin, or hear talk of carbs. Henry wears an insulin pump, usually around his waist, and other children are often curious about his “phone” or “iPad,” which is really his pump.

As Henry’s parents, we’d like to take a moment to share with you how our life, particularly Henry’s, has changed. We have to count all the carbs Henry eats and give him insulin to cover the carbs. Basically Henry’s blood sugar is measured, he is then given insulin remotely through a pump and meter-remote, then he eats. His blood sugar is checked two hours post meal. We repeat this every time he eats. Henry wears a pump 24 hours a day that delivers insulin through a needle that is subcutaneous. He also wears another device (continuous glucose monitor (CGM)) on his back or abdomen that measures and transmits an estimate of his blood glucose.

He can do everything any other kid can do, but it just takes extra planning and monitoring. For example, what can’t happen without planning is for Henry to be given a cupcake at a birthday party without insulin. He can still eat cake and cupcakes at birthday parties, but it requires planning and extra carb counting. We always have to know how many carbs he eats and when because he needs insulin for this.

We want Henry to participate in every opportunity, and we want him to feel included, but because of type 1 diabetes, this means we have to plan more carefully. We don’t expect any family to change how they choose to celebrate his or her child’s birthday at preschool. Our purpose of this letter is to inform you. Deli frosted cupcakes make tight management of blood glucose difficult. Angel food cakes, some cheesecakes, and pound cakes tend to have lower carbs than other cakes. Reduced sugar yogurts and popsicles are also good treat alternatives. “Free foods” are foods without carbs like sugar free Jell-O or cheese sticks.

Vomiting from tummy bugs and fevers from colds are particularly troublesome because the stress of the illness raises blood sugars and produces ketones in people with diabetes. What is a regular cold for a kid without diabetes means careful monitoring and potential hospitalization for a child with diabetes. Last year, Henry was in the hospital twice as he battled a tummy bug with type 1 diabetes.

While Matt and I wish this road were different for him, it isn’t, and our job is now to normalize a life with diabetes for Henry, and to be his advocate. We’re sharing his diagnosis with you because he is so young we are the ones managing his care; we feel the more people in our community who know, it increases the possibility of better management. Of course, we’re open to questions you have as we learn together how to keep Henry healthy. A good website is http://www.diabetes.org and http://www.jdrf.org. He’s a healthy four-year-old, who also happens to have diabetes.